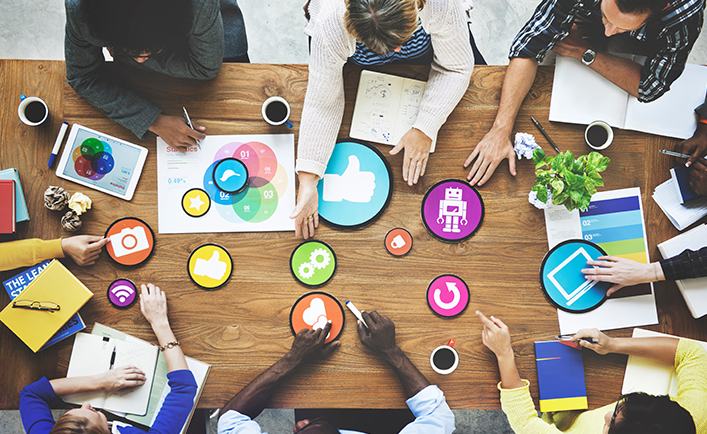 Let’s start by stating the obvious: marketing is about selling stuff – goods or services – and making a profit.  Traditionally this has been done through press and television advertising, outdoor media and point of sale material.  Their purpose is unambiguously promotional and their message is essentially ‘buy this’, perhaps with some added incentives like discounts or special offers.

With the digital age came new media – social platforms like Facebook and Twitter – which offered new ways to connect with potential customers.  But it’s important to remember that the origins and intentions of these were social, and not business oriented.

Facebook, as you’ll know if you’ve seen Game Changers, the film bio of Mark Zuckerberg, began as an on-line college yearbook that allowed students to compare faces – literally – and give their opposite numbers marks out of ten for sexual attractiveness!  Twitter, which came later, began as an open-ended text messaging that allowed users to share their wit and wisdom in 140 characters.

But the business potential quickly became obvious, especially when Facebook and Twitter membership rose into the billions and became a market place commerce couldn’t afford to ignore. So, it annexed it.  But businesses that mistake the essential nature of social media do so at peril of being ignored, or worse, becoming on-line social pariahs.

How to explain it?  It’s sometimes said that more business is done on the golf course than in the boardroom, and social media works in much the same way.  If a company website is a business in its pinstripe suit, its Facebook or Twitter page is the same company but in polo necked shirt and tartan trousers – in more relaxed, informal mode so to speak.

From this it will be seen that social media plays an important part in the marketing mix, but a complementary or supportive role rather than the main thrust of a company’s marketing activities.  To use social media in the same way as you would a paid advertisement is to invite the same sort of reaction as you would have to an aggressive insurance salesman at the nineteenth hole.

The trick is to use the power of social media to do what it’s good at: forming and developing customer relationships.  The first objective of a Facebook or Twitter page is to attract ‘friends’ or ‘followers’ who ‘like’ what you say or agree with an opinion or insight you offer on a current issue, and decide they’d like to hear more from you on that or a related topic.

The aim is to join the conversation and draw in potential customers rather than buttonholing them with a sales proposition.  Softly, softly, catchy monkey, as they say.  You reveal a little of your personality, let drop a bit of your expertise, and before long you have a captive audience that is eating out of your hand.  And if you’re lucky your comments may strike a chord and ‘go viral’.

But even if you don’t become an overnight celebrity you will be steadily building your brand, and raising your profile in the market place.  Your social media pages also serve as on-line chemistry meetings for potential clients or employees who are considering working with you or for you. Short of actually pressing the flesh, checking out your Facebook page is a great way to see if your face fits.

In short digital marketing can do a great deal for your business.  But remember that its just an element – albeit a very valuable one – in the marketing mix.  The most potent marketing formula is one that combines traditional and digital media – or ‘tradigital’ marketing as we call it!